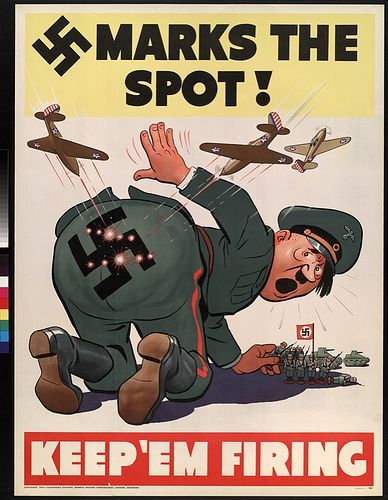 Nope. While you’re likely a friend trying to troll me I’m in the mood for this one.

It’s not anti-Semitic. Might it undermine the horror of what the Nazi’s did, okay, that’s a more interesting question (still not anti-Semitic though). But I tend to believe there are different ways to attack an ideology  and one of the most powerful is to disparage or mock it.

As CS Lewis cites in the introduction to the wonderful Screwtape Letters,

St Thomas More wrote, “The devil… that proud spirit… cannot endure to be mocked.” Making fun of something can be far more powerful than righteous indignation. Just look at some of the most powerful war time propaganda. They knew the power of ridiculing the Nazis rather than just screaming ‘the horror, the HORROR!’.

While Saturday Night Live or BBC’s The News Quiz, or most powerfully Spitting Image in days gone by prove the point just as much.

So if I can reduce the power of any kind of facism by appropriating it as a term where it’s only power is to describe how I like to spell check, I think that’s a good thing. You’re free to disagree, it’s my blog, not yours.

More than that, I’ll wager a hell of a lot more of my ancestors got killed by the Nazi’s than yours so if I can manage to not be offended I’m going to say that’s good enough.

Let’s try to stop turning taking offence into a national sport and get back to kinky fun, shall we?