Hey.. looking for someone I used to follow on here. All their captions were about a group of sexy superheroes fighting super villains. Lost my old tumblr so have no idea what their username was, and their stuff used to have me dripping like crazy

Hmm, couldn’t tell you but let’s see if someone can!

Do you or any followers know if there’s a transcript of Cal’s Curse? I’m more of a denial bitch so I don’t want to hear it myself, but I want to see what it tells all you suffering denied girls! I found some links talking about a transcript, but none that actually work to read it. Thanks!

…I’m only just getting started,’ he growled as he opened his mouth over her clenching, fevered mound.

The things he could do, felt so good, nothing compared, nothing was good enough but his tongue any more.

But it would all stop if she came.

He owned her now, a slave to pleasure, and she adored it. 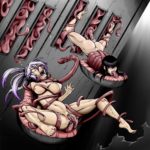 No one knew where they came from.

No one knew what they were for.

But the 7 sets of three apertures knew what they were doing. Somehow they were able to stimulate a woman to the absolute edge of the greatest climax of her life, and keep her there, right on the brink of sexual insanity, until finally she orgasmed, and kept on orgasming, until her body and mind were overwhelmed, and she lost consciousness.

Sometimes it would keep her on the edge for days, and the orgasm might be up to an hour or more.

And then, gently she was laid down, taken away by those who went before, to sleep, to recover, but forever changed. They would spend the rest of their lives on a sexual high, so alive, so free.

It was a price worth paying.

The 21 tentacles would never accept them again, they had done their job.

But word spread, and the queue just kept getting longer.

This is your punishment, sweetheart. The Wheel of Denial has to be obeyed.

I’ll let you grind your pussy on the edge of the mattress though, because it’s your first time. But that’s it!

Oh and your boyfriend should read this:

You are so fucked.

Hi James! I was wondering if you knew of any blogs where women who are allowed to come get to mock or tease those of us who are being denied? Knowing that another lady has been getting off while I’m forced to edge without release drives me crazy, and I’d love to read more of that, if it exists! Can you or any of your followers help me out? (and I love your blog, by the way!)

Oh, that’s a good one. I don’t know any blogs like that I’m afraid, but I’m sure we can satisfy your need to be degraded and laughed at (always helpful aren’t I).

Rub it right in their faces. And I’ll publish the best ones.

(This could get interesting).