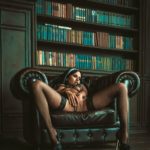 She waited outside the room, trying to maintain her arousal, to make sure she was right in the zone for what was about to happen. She didn’t know the details, they were a secret part of the process. But she did know that only a chosen few passed the trials she was about to endure. Perhaps one in five of the Novices like her.

She was scared. She wanted it so much. To be like the full members of the Order of St Margaret the Chaste. To dedicate her life to chastity and self-denial.

She understood, for the first time in a year, she’d be orgasming in that room. She’d heard the previous novice, and the one before her. But they’d failed. Perhaps they weren’t supposed to climax. She’d been told she would. Was it a test?

Either way, if she passed she knew one thing for certain. It would be the final orgasm before her vows. And so, her final one ever.