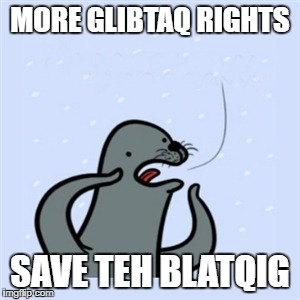 LGBTQIA doesn’t need another consonant, it needs more vowels to make some kind of pronounceable word.

You really think gay press would be more media savvy. You can’t just keep adding letters, unless you make it A WORD.

With the current set the best I could come up with was:

BLATQIG or GLIBTAQ – they don’t really roll of the tongue though.

Hmm, I don’t think it’s going to catch on.

But I think we have a solution!

You see if we add an ‘O’ for Others, which really is even more inclusive so it must be good right, we are able to get:

BIGOTLAQ which is almost a real word but actual really pertinent (bigot lack, get it?) (yes I am a genuis, you saw it here first)

This could be big guys, I think we’re on the verge of something great. But I’m open to other suggestions of ways to improve it in the notes, although none will be as good as this one, I’m telling you now.

Just in case I misunderstood the debate and the OP was asking about whether Kink should be included in the same category as lesbian, gay, bisexual, transgender, queer, intersex and asexual or ‘allied’ then nope, it’s a stupid idea. Kink is a completely different class of category, that can apply to all or none of the above, and needs to be pushed as something everyone can explore, not suddenly turned into an exclusive definition.

So there you have it,

BIGOTLAQ – you saw it here first!

BIGOTLAQ™ is now a (nearly) registered trademark of James and if you use it you are going to be hunted down by a cat with a golden gun).