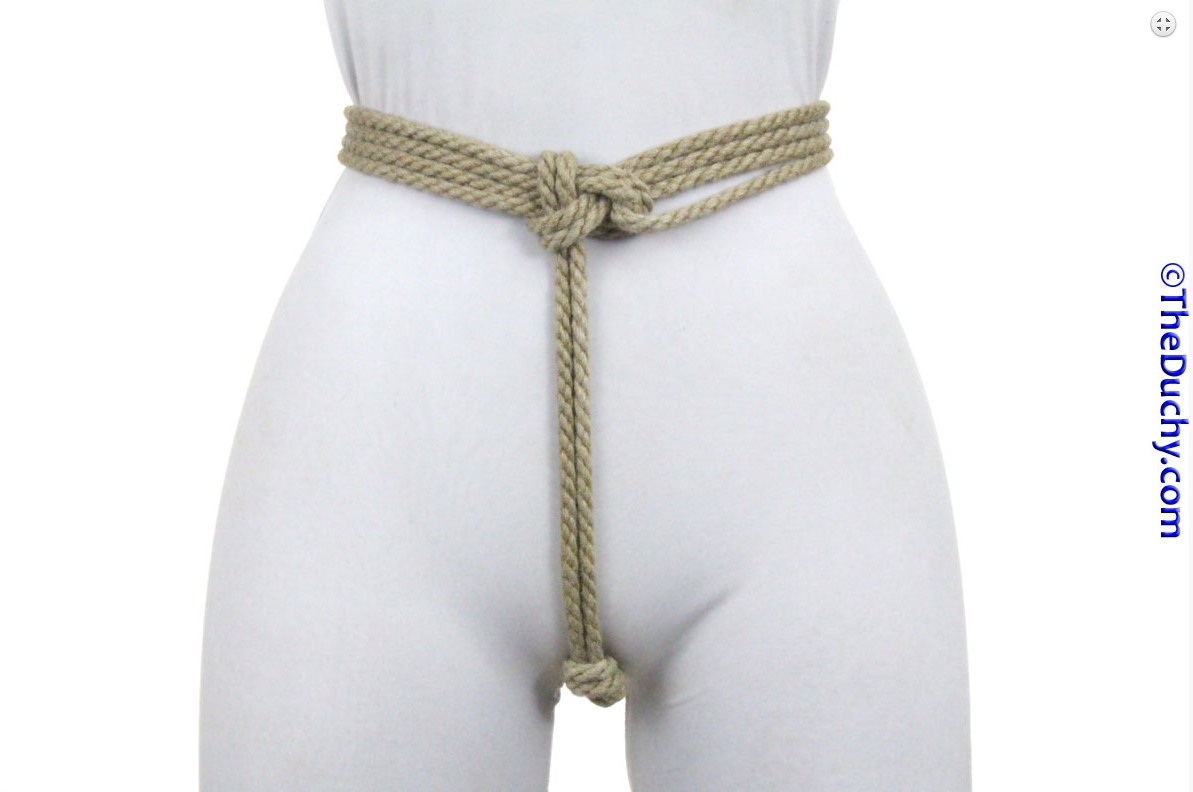 The quick answer is, yep… it looks like this…

The Unchastity Belt from The Duchy – great bondage instruction site

I know, I know you want all steel and shiny and lockable but here’s the problem. Your ass is amazing. And really bendy. And locking up your pussy is surprisingly difficult.

So unlike men, who’s chastity cages are a simple ring around the balls and snap on a lock, it’s very hard to make a good female chastity belt. And as such good ones cost hundreds of dollars, and even then they will only work for some women’s shapes.

There are cheap ones like this from Lovehoney which is £30 but, it’s plastic and not very effective at all.

So that’s why rope is a good cheap option, because I know it doesn’t lock shut but if you put on a good crotch rope it acts as solid first barrier to you touching, plus it rubs your clit like crazy and drives you nuts.

There is an interesting middle ground that you might want to try, a chain crotch rope.

Firstly, this never, ever, ever goes on your bare pussy, Got that? Unless it’s specially designed (like the ones used in underwear) chain is pinchy as fuck and should only ever go over clothing – but that works to lock the knickers on you so it’s actually quite effective.

And also these links are too big, you want a finer chain with smaller links. But it illustrates the idea of putting it over your knickers. There are some chains designed not to pinch, so look out for those, they type used in choke collars and dog leads for example, but they often aren’t long enough.

The easiest way to do it is with a single length of chain and a small padlock. The chain goes around your waist from the front, and when its’ a snug fit you put the padlock hasp through the first link and the one that’s come around to the front (but don’t lock yet) and then thread the chain under you, over the top of the chain ‘belt’ part behind, and back between your legs again, adjusting the fit and locking the padlock through the three links, the first one, the one end of the belt one and finally the chain returning from between your legs.

Alternatively two lengths of chain, one for your belt and one for underneath like the picture above, needing two padlocks.

You want thicker underwear than this really, and boyshort cut are useful too as it protects your thighs, but all that aside, this can work surprisingly well.

You do of course have to untie it to pee, or you can awkwardly pull them to the side. If you want something that keeps you locked and still lets you pee then you’ll need to splash out on a proper belt.

There are chastity belts you can get for about $50-80 from China nowadays, and some of those might be good but it’s a lot of money for something that’s going to be very hit and miss and you can’t return.

If you’re willing to risk it though there’s a good selection on Aliexpress, such as this one:

Which is a better looking design than others I’ve seen.

Anyway I hope some of that helps. It really is frustrating that there aren’t good cheap options as there are for cock cages but it’s a far more complicated thing to get a genuinely effective chastity belt for women.

Try the rope, try the chains over panties, see how you get on. That might be enough, but if not do your research and you might be able to find something cheap that’ll work great for you. If you do, let us know!