Hey James! So my boyfriend is amazing and we great (vanilla) sex. I remember on one of our first dates that I of course, brought up sex and how I’m super kinky and have several fetishes. He smiled and said he was into that too. But I really don’t think he is! Sex isn’t the first thing on his mind, just being with me is. Which is great, but every time I bring up wanting to try something new it never happens. I can feel my submissive denial slut dreams slipping away, any advice? -Em

Great question, and one that I’m very passionate about helping you solve.

As a man I feel qualified to state that men, especially ones in late teens and early 20′s, no matter how amazing they are, are fundamentally clueless sex-monkeys who have yet to develop any meaningful communication between their brain and their cock.

As such, we will say whatever we think you want to hear to get closer to you, and by closer, I mean fuck.

However, do not give up hope, not at all. The fact he’s generally amazing and great at vanilla sex is about the best start you could possibly hope for.

How do you get good at anything? Practise and training, that’s how. This is one of the few areas ‘training’ seen as taboo (and, insanely, in parenting… we teach kids maths for 13 years but mandate zero hours on raising kids. And we wonder why the world is going to hell in a handbasket).

Anyway, rant over, back to my point. Him just ‘being into it’ is not enough. Being dominant is hard work, trust me. Sometimes I get women I’m teaching to try domming someone under my guidance. The end result, almost always, is they end up in tears. Not because they are upset, it’s all very gentle and easy, no, because they all say ‘OMG I HAD NO IDEA HOW HARD THIS IS! And you do this all the time, for me!’

Because domming is really hard, it’s a big responsibility, but also, if you are that way inclined, it’s one of the most wonderful experience you can have and the ultimate privilege to have someone put their trust in you like that. (Plus it comes much more easily if that’s your natural inclination).

It’s particularly skewed because subs, and female subs in particular, tend to mature WAY faster than guys, and dom guys in particular. It’s more about sex than role in my experience. I know a few insanely capable early 20′s dommes. I tend to find male doms don’t really come into their own until late 20′s.

But that timing is without help. That’s in a large part because they have to figure it all out themselves and develop the maturity and character to take that role. But I’m convinced that within a loving relationship, with honest communication, you can really shortcut that process. It requires both of you to agree that’s what you want to try, and commit to training and practising and creating a safe place within the relationship, for both of you. For him to try, and fail, and you to get out of your sub space and give him feedback and encouragement.

THIS IS NOT TOPPING FROM THE BOTTOM – don’t even get me started on that bullshit. It’s fed to you by asshole doms who just want you to do what the fuck they say without question, which is usually sending them pics of your boobs that they can jerk their tiny dicks off to.

God I really am ranty today.

‘Topping from the bottom’ is better known as communication. A sub telling her dom what she’d like or needs. This is never a bad thing, unless you are such an insecure asshole that it threatens you. I NEVER mind being told what a sub wants, it’s still entirely my call if she gets it or not. So yeah, get passed that nonsense and start telling him what you want and need.

The bigger issue is you don’t want to, of course you don’t, you want him to psychically know what you’re craving. Is that realistic? Nope, not yet anyway. The time will come where it’s like he can read your thoughts, trust me, I get accused of being psychic all the time. But for now, he needs to know your thoughts in order to learn and become what you want him to be.

But good communication it does require knowing what to practise and input from those who have trodden the path before you. There’s a few good examples of D/s relationships here on Tumblr, but it’s still something I think there’s a dearth of good, basic content on how to explore this journey as a D/s couple.

Teaching couples is something I love to do and have done for over a decade now, but it’s incredibly time intensive. So I am thinking about setting up a Discord chat server, that couples in your situation could both join, to access ideas and share experiences, and get my input on a more constructive, shared basis. So if that’s something you’re interested it (and I’d love to know if there’s demand) then do ping me an email to james@thegentlemandom.com and if there’s enough interest I’ll reply to those emails with maybe a test of the concept.

Also let’s use the notes to recommend good blogs to follow and other resources, and share experiences of what has worked, or hasn’t, for everyone.

Just to sum up and answer the OP’s situation more directly. Em, there’s a number of reasons it ‘just never happens’ so more than just bringing it up, I’d suggest you sit down and have a proper talk about it. Hints in what you say suggest he may not be very naturally dominant (although he sounds lovely) but that doesn’t mean this won’t apply to you. So much of the exploration of D/s is just crazy, hot fun that ANYONE with the slightest kink to them will enjoy. Roleplays, bondage, denial, toys, sado-masochism, it’s all great stuff to explore and see how the different things work for you. Just accept that you’re working from a strong starting point, and don’t keep comparing him to some fantasy dom that doesn’t really exist and I think you’ll soon find some areas to explore together and start down the wonderful D/s journey. And of course, email me as suggested, more than happy to give specific suggestions

I hope that helps 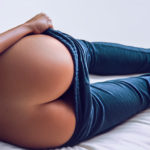 Ever wonder where the ‘heart’ shape came from?
Yep, it’s not your heart, something far more fun…
And yes, you’ve been drawing asses on everything thinking it was cute.
It was, very cute. 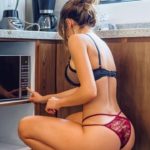 You live somewhere warm, right?
Yes.
And have the house to yourself all day?
Yes.
So why do you wear clothes?
Because…I don’t know.
No neither do I, lingerie and sneakers only while you’re being denied. Is that clear?
Yes, Sir.

It had been three weeks since the new rule. She loved it. ‘Why do I wear clothes?’ she began to ask herself.
Soon she’d be down to just sneakers.

Put the keys in a glass jar or bottle, fill it with water (don’t cap it) and put it in the freezer.

You can start pondering what the fuck you’re going to do next when the batteries finally die. (But unbind your boobs long before, they shoudn’t be tied too long, as I’m sure you know).

My college friend that i have a crush on knows i do orgasm denial. I asked her for her tumblr and your url was in my search history and i almost died of embarrassment. I lied and said my friend told me to look it up and i wad curious but i dont think she believed me but found it all very amusing. I thought you’d enjoy the story but now I’m really scared she is gonna search it on tumblr to see what it is and know just how kinky i am or even worse find this blog and even this post.

Sometimes it takes me ages to reply to messages but this is an insta-reply for obvious reasons.

HEY ANON’S FRIEND – yep you, browsing this blog and getting curiously aroused – your friend loves this shit.

She isn’t really scared you’ll find this, she’s nervous but she totally wants it. She wants you to know how kinky she is and be able to talk about it with you.

Oh and yeah, if you find you’re into it too, this might be of interest:

She’s reading this now and both creaming her panties and running around screaming at the same time, you should probably call her.

Or maybe just a text…
‘So, denial buddies huh?’

Edging.space – bringing friends together in new and unexpected ways

Hey Lana, nice to hear from you again.

I know that’s a bit of a downer, but I do just want to make sure you’re keeping safe and sane with this stuff. You’ve seen the power denial can have in terms of affecting your mental state, and that can be incredible and positive and liberating. but using it to put yourself in the situation where strangers are effectively wanking off in your asshole isn’t a great plan.

If you do decide to continue with this though, please be careful, follow all the  rules about someone you trust knowing where you are, and for the love of god use condoms, every single time. Okay?

If you want to talk it through, just message me, we can chat it through in more detail.

I just wanted to say, your „sex advice“ is the best guid i have ever read. All men should follow this if they want to make a girl really really happy. I mean yes it’s for vanilla sex but even I would enjoy it.

Thank you! I’d forgotten I’d written it but yeah, it’s pretty solid, with lots of good tips there, whether it’s a first time or the thousandth.

So I totally fucked myself, and by that I mean I’ve listened to Cal’s Curse a couple times. I already found asking for permission incredibly hot, but it would have been nice to not have to ask EVERY time. What am I going to do when faced with vanilla partners? I haven’t had an orgasm in over a week. I’m desperate for attention. And now I’m completely and totally fucked. So thanks.

If you do hypno with a partner though, and they really know what they are doing, you genuinely can have long lasting, even permanent effects. To the extent I know responsible hypno doms putting in a ‘if I die this ceases’ clause in their scripts!

If you want it to, of course.

I find it more likely, and certainly hotter, that you’ll find yourself creeping back to listen to it, again, and again, faking your orgasms as you edge on their cock or fingers, weeping with frustration and more aroused than you ever knew was possible.

And they’ll believe you.

You are so fucked. 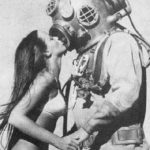 Ralph respected his girlfriend insisted on safe sex, but this was taking the piss

‘Time for your edge, madam’ said the butler. ‘What is your preference this evening?’