Oh no, I was away this weekend and I missed it. I’m so sorry.

Don’t worry. It’s less than a year till your next one…

But really, we’re humans, not machines. Our responses change and adapt and that’s part of what’s so interesting. It’s different for everyone.

You can usually reset anything by stopping for a few days and starting again.

But something tells me you like the idea of being broken.

Oh, and the question! I forgot! Do you have any tips for me to get back on track again as a denial slut James? Saylan

Too late I answered already!

Once a denial slut, always a denial slut. it’s always there, ready to take you back as soon as you’ve got bored of just plain old pleasure…

Denial or not, the most important thing with sex is keep trying new things. Some aren’t going to work for you, but some are going to blow your mind.

Your body is capable of so much more than you realise, and part of why I love denial is it’s often the gateway to help you discover that. 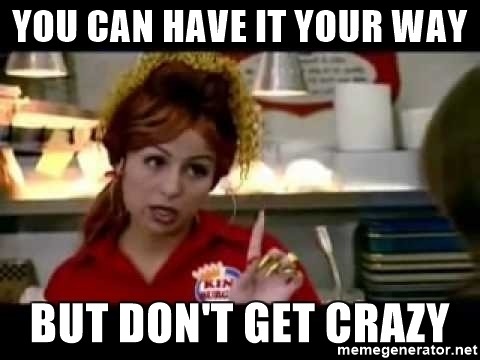 Wanted to piggy back on the faked orgasms while on denial thing. I’m super into denial but really specifically do not want it to include anyone else irl, even my husband. I’m not a sub and am probably the more dominant one in our relationship, and denial is something I do just for me. I don’t wanna be the No Fun Brigade b/c I do totally understand the theme and the fun of your blog (longtime follower :P) but for me, involving others would spoil the fun and the challenge.

This is totally okay too and thanks for the alternative experience! It’s all good!

Your Denial, your way!™

Heya, I get if you’re not comfortable answering this, but would you hold it against a sub for having self harm scars (or even some fresher cuts)? Would you still play with them? What would you do?

Goodness no, I wouldn’t hold it against them. And it’s always okay to talk about.

Hear that again, it’s ALWAYS okay to talk about. I’m so glad you asked.

Self harm is never cool, it’s awful and the reasons you do it are complex and difficult and ugly.

But that doesn’t mean you are. You’re beautiful, with or without your scars. And they are part of you now, and that’s okay.

We don’t want any more, and we want to learn not to have to make new ones. But that starts with you loving yourself, and being loved, just the way you are.

So I’d kiss the scars, and make you kiss them. I’d tell you it was okay, that there are other ways to let it out.

And if they needed more, to let it out, I’d have them ruin an orgasm, ruin so fucking hard they cried.

And it worked, for most of them, most of the time. Not always, for everyone. But that’s okay, we slip up sometimes. We just talk about it, forgive ourselves, and keep on swimming.

And when those new scars heal, which they will, we can kiss those too.

Let me just encourage anyone who feels the urge to self harm, be that cutting, or burning or unprotected sex (yep, that counts) or anything up to and including suicide.

It’s going to be okay. I know you feel like it isn’t, but it really is. There’s lots of ways to deal with it, but they all begin one way, which is reaching out to someone you trust and not being scared to talk about it, just like anon has here.

You may think there’s no one who you can talk to, but I’m going to gently call ‘bullshit’ on that one. Let me point you to the nicely constructed 13 Reasons Why info site as I’ve just finished watching that show and it has lots of helplines and numbers for most countries: http://13reasonswhy.info/ There will be more specific groups helping with self harm in particular but these guys love to listen, and will point you in the right direction. Call them, right now, they are good people who want to help.

Hi James, I just broke my self-denial record (55 days!) with doing at least three edges per day (5 on the weekends). Originally I only wanted to go for two months, but after reading through your blog (and edging many, many times to it) I’d like to know if you think I should hold out for longer. Thanks, Hannah

But just one day. Then you’re done.

After that, I want you to break your record again. Four edges a day, six at weekends, longer than before.

Oh Catherine, I feel so sorry for you.

I had someone transcribe the text of Cal’s Curse for me recently, they had to listen to it again and again to get it all…

Here’s a bit of it that relates to your present situation:

You will find this very humiliating of course, but also very, very arousing. You can get permission in any way that makes sense, in an email or through instant messenger, or through voice. But it has to be a real person other than yourself giving you permission to orgasm this one time. And if you have that, and only if you have that, then you will be able to cum. But without that it will just be impossible. And you will find that asking for permission is very humiliating and degrading. You will find that it turns you on and arouses you, but makes you feel so, so submissive to have to ask for your own permission to cum, because your body doesn’t let you anymore, because you have become such a submissive submissive slut. That will be the only thing you’re allowed to do, you can’t even control your own orgasms. And you know that with most sexual submission losing control of your orgasms is very important. That’s what makes you very submissive and very humiliated.
You may find yourself going out to the internet and instant messenger or the chat groups asking and begging for permission to orgasm sometimes. This will be very humiliating for you. And you will tend not to do it. There will be a tendency to resist it of course. Because it makes you so humiliated. But you also know that without it you will not be able to have any kind of orgasm at all. It just won’t happen. Your body will just betray you from now on.
And so you may find yourself getting aroused by the thought of asking someone else for permission. And knowing that even just this asking will make you feel so submissive. And as you ask, and perhaps get turned down, it will drive your arousal more and more.

Go a week without panties, edging at least five times a day and you can ask me again.

What have you done to me? I’ve been denied for two months now, and last night my boyfriend was fucking me and told me I could orgasm if I want to and I said no! I like this feeling too much and I don’t want an orgasm to ruin that, I hate and love you for it

Now be a good girl and send him this if you haven’t:

Thank you. It means so much to me to hear this. I know denial can just be a bit of fun, and that’s great, but it’s the fact it can have such a deep, powerful impact that makes me keep wanting to do this blog and promote orgasm denial.

Well done on being brave enough to want to change, and bold enough to do something about it.

A heads up though, there are probably still things you need to work on. You guys having sex again is brilliant, but it’s just the beginning.

Make the most of the new positive dynamic to take time with the other stuff. Get a weekly date night in place so you can have your romance fix. Get away on ‘dirty weekends’ at least a couple of times a year. Create a shared secret tumblr where you can post kinky shit to each other. And set up a private messaging service for JUST the two of you, something like Viber or Telegraph so you can send each other cute and sexy messages without worrying it’s going to appear on your Facebook wall.

Those are really good questions, but here’s what I’ve found.

Sex is magic. If your relationship is at a place where you can start having sex again, it builds a foundation for so much more to be sorted out.

It seems obvious to think of sex as something that can happen when all our emotions and relationship are in a good place. But it’s really counter intuitive. Start fucking again, despite how you’re feeling, and it acts like a jump start on your relationship.

If you can take that first step, even if the issues aren’t your fault, and get back to enjoying sex together, then it will put you in a much better place to get the rest sorted. Men being men, we’re crap at taking that first step, so if denial helps you feel in the mood and take the first step as it did for Nicole then I urge you to try it.

The reality is, us men aren’t very complex creatures. Show us a bit of love, suck our cocks and fuck us and we’re happy. It’s just how we’re wired. It’d be lovely if we were spontaneously romantic and selfless, but on the whole we’re not, especially when deep down we feel we’re being denied sex. It’s petty and stupid and often unconscious, but it’s just how it is. If you can be smart and brave enough to take the first step and fuck us despite that, in many (not all) cases you’ll start a happy avalanche of positivitiy that’ll flow down the hill and create lots of other things that you want.

We’ve been there as a couple. When we had our first kid it killed our sex life. We went from being a kinky little pair of fuckers to exhausted, sexless, frustrated parents.

It took a long time before we both realised we need to fix things, and got back into having date nights, and sex, even if we weren’t in the mood, and then we found we were in the mood and it didn’t take long to get back into the swing of things.

So is it cheating to use denial to kick start this? I don’t think so.

I remember Jane on her @keephimcaged blog saying if there was a pill that made us feel the way denial can, we’d be selling it by the truckload. I love that, it’s so true.

Nicole could have been the classic stalwart wife and just laid back and let him fuck her. But it’s just not the same, and both of you feel that. Instead, to kickstart herself into wanting it, just by edging. Brilliant. And as she says, ‘saved her marriage’.

Thanks Nicole. I’d love to hear more about it if you feel brave enough to message me, everything’s in strict confidence.

And what about you guys reading this. Has anyone else had a similar experience where denial has helped your relationship? We’d love to hear about it.