Hello again. I’ve been having such a great time with the “Card Game”. I love (and hate) the feeling of knowing I can’t go over the edge and can’t edge as much as I want. Unfortunately I didn’t do all the edges I was supposed to do yesterday and only did 7 of the 9. I was wondering if you could give me a punishment. Thank you El

Good girl El, your honesty is admired and sharing most appreciated!

If you’ve failed the cards then I think it’s only appropriate I use them to determine your punishment.

From the part of the pack you’re NOT using for your denial, or a separate pack, you’re to pull ten random cards, face down.

You’re going to get spanked.

The suit determines where:

Work through all ten cards, turning only one over and acting upon it before you turn the next. Do that in one sitting or a few if you need to, and then your punishment is complete.

So, I know this is a female denial blog but sometimes you just see an artist at work and want to share.

Ignore the drone of her vibe, the very weird edits and sudden ending, this is a thing of beauty. It makes me wish female chastity belts weren’t so ridiculously impractical.

If anyone has any idea who she is, do share! Dommes can do crazy in a way no guy can ever pull off… 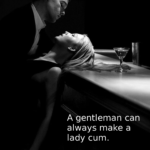 But sometimes, he chooses not to.

I’m sitting on the couch under a blanket, knitting quietly and watching a movie. From the outside I probably look like a Nana.

And yet all I can smell is my wet kitty. I’ve been wet All. Damn. Day. Truthfully I’ve been wet for two weeks now. The same Tumblr post has been circling my brain all day – @yeslillylillylove’s “He thinks I’m prettier when I’m dumb” post.

In short, I love denial. I couldn’t do it permanently, that idea is still too extreme for now. It will be interesting to see how that changes over the months to come, given how quickly I’ve come to love denial itself. But right now I’m having the time of my life.

A lovely description of denial! Thanks Ellie.

What state are you currently living in?

Hi, and thanks so much, the blog is pretty new too so it’s great to know it’s helpful! Congratulations on introducing it to your marriage, I’m sure you’ll both reap the benefits.

So, when we think about orgasms after denial there’s a few things to consider…

Firstly you need to think about how you’re going to break the news. This is surprisingly important.

Try all of them and see which works for you guys!

The KEY THING you need to remember, especially after extended denial (which can be anything from a few days upwards) is that the first orgasm MIGHT not be very good. That’s not always true, but the longer the denial, the more likely it is.

As far as I can see it’s basically because your body is out of practice! You may have edged so many times it’s just got used to that, and an actual orgasm comes as a surprise.

In terms of practicalities, I’m a fan of hands on… When you bring her to orgasm there’s nothing like doing it with your fingers, lying beside her, looking into her eyes, seeing her beg for that last time, kissing, smiling, teasing, knowing it’s going to happen, and then watching her go over the edge. But you can use vibes, you can fuck if that’ll do it, just I like the control on that first one that fingers bring. Then for the follow up orgasms vary it, use toys, fuck, whatever, until she is utterly exhausted and wants to just curl up on you and tell you how much she loves you. Don’t forget to tell her how proud you are of her, how much denying her has excited you, how beautiful she is then and now, she’ll absorb everything you give her and adore it all.

I hope that helps!

I don’t have anyone to deny me, and unfortunately don/t have any toys, nor am I in the position to obtain any, would you mind telling me some tricks that I can do to still have fun? ;)

Not having toys isn’t a big problem, you mustn’t let it stop you enjoying playing with denial. In fact there is nothing better for a perfect tease than just using your delicate finger tips to take yourself right to the edge and keep yourself there.

Vibrators can certainly make the process quicker, which if you’re trying to achieve lots of edges is helpful, but I actually find you can get too reliant on them and tend to insist that the first and last edges of the day are just made using fingers anyway. I’ll give you some ideas for DIY sex toys below though!

Don’t forget DIY toys though, some people prefer them to proper toys (the kink probably even has a name…).

Here’s a whole article with ideas on the above and more plus safety tips etc – http://www.scarleteen.com/article/sexuality/diy_sex_toys_selflove_edition

In terms of not having someone denying you, games of chance are wonderful, I’ll try and add some more in addition to the Deck of Cards one I wrote that you may have seen. I’m also going to try and add some tasks for those without someone denying them, to participate in and enjoy. If you want to be a guinea pig for some of those and try them out, then drop me a private message or email me.

Thanks so much for this feedback. I’ll get working on it, something that you can hand to your partner and just say, ‘You need to read this’ and hopefully give them a gentle but solid introduction to the joys of denial, especially from a man’s perspective as the denier, and get them started on taking you down a wonderful journey of denial together.

Anyone else have thoughts on what would be useful?

I wanted to ask because I didn’t know you could ruin an orgasm for a girl, i mean i’ve seen it done to guys. How does one do that exactly to girls?? P.S. Major kudos to your blog. inspired me to do 20 days of denial with my Sir, and he’s enjoying it

What a great question, and thanks so much for the encouragement!

So, ruined orgasms… they are a really interesting tool in our denial box of tricks. With guys they are very easy to manage, and the results are much more predictable (he starts ejaculating, you stop rubbing, he dies inside…) WIth girls it’s MUCH less predictable. It can sometimes have little effect and be nearly as good as a normal orgasm, other times it can leave you emotionally distraught and in tears, and it can also make you want to kill someone, which is quite amusing. This doesn’t only vary from woman to woman, but from time to time, but I’ll describe how I recommend doing it from a denial perspective, i.e. to not let you stop being horny but to give you just a taste of an orgasm but none of the fulfilment of it.

How to ruin a woman’s orgasm

The hornier you are, the better, in my experience, so doing this after a period of edging and denial is perfect. A ruined orgasm is all about the mind fuck, and so be prepared for it to hit you quite hard emotionally too.

Keep this going, you want four or five ‘practice runs’ before you go for the real thing. And when you feel you’re ready, just keep going, keep fucking, keep rubbing, faster, harder, as you get closer and closer and then go over that glorious edge and then… PULL it out. STOP rubbing. Feel your poor cunt clench on nothing as it spasms in a phantom orgasm and you scream in frustration. Make sure you relish the true agony of all that pleasure being snatched away from you – it’s brutal, make the most of it.

Oh and at this point I should add, you can chain ruined orgasms together (sometimes in guys too, which is most unusual compared to normal), so that you get a couple of minutes to recover and then start the fucking and rubbing again and ruin it, again, and again, and again. If you can cope with more than four in a row you are seriously fucked up, congratulations.

I might mix them up, so make the first one vaginal only, second one clit only, then a third with both stimulation. Spice of life and all that…

Be prepared to feel like shit and to want to kill everyone you meet. Your body is flooded with all kinds of hormones and never gets to properly vent them, it’s some seriously crazy shit. But then, if you’re reading this blog, that may well turn you on. It can take up to 24 hours to return back to normal.

Despite their horror, a well trained denial slut can be taught to crave being ruined over having full orgasms. That’s seriously fucked up and so hot… and can turn denial sessions into seasons by simply ruining again and again instead of giving orgasms.

Do you ever ever let your Kitten have an orgasm? Or is this a permanent denial thing you guys have going on?

I do, yes, but it’s very rare, as much because that’s how she wants it as my personal preference.

Ruined orgasms are a nice little compromise which I love to use a little more regularly as they give just a tiny taste of an orgasm but then bring a brutal emptiness that does almost nothing to diminish the desire and need that’s been built up over weeks.

I’m not a fan of permanent denial, although I do tease it as a fantasy. I love to give orgasms, that’s the twisted part of this, there’s an element of it also being denial for me – so I’d never really want to forever prevent them.

More importantly, hope is so important to the real mind fuck of this. With permanent denial there’s no room for hope, hope that today might be the day, hope that I might be weak and give in to her desperate begging (I never do but I love them trying).

But it’s about what she needs, not what she wants. And she needs to be denied.